Indian Classical Dance; these three words promptly reminds everyone of Kathakali from Kerala. Unlike every other dance form, Kathakali also has special costumes, make-up, and steps but even then the dance forms from Kerala have always received special attention from people across the world. India is blessed with many other state specific dance forms. From Kerala to Karnataka, Orissa to Manipur and many more on the list; each of these states has a specific dance form which many Indians and Foreigners must see at least ones in lifetime.

Keeping this mind every year Kerala Tourism organizes an event named as the Nishagandhi Festival 2017. The festival is all set to start on 20th January at Kanakakkunnu in Thiruvananthapuram. The Hon’ble Governor of Kerala, Shri. Justice (Retd) P. Sathasivam, will inaugurate this event at 6.30 pm. The festival is to be celebrated for a week and so you can enjoy altogether seven evenings of classical dance performed by various well-known and prominent dance artists across the nation.

Brief information about the event is as below:

About Odissi: Odissi is a highly formalized dance form from Orissa and moderately based on the traditional Natya Shastra and the Abhinaya Darpana. 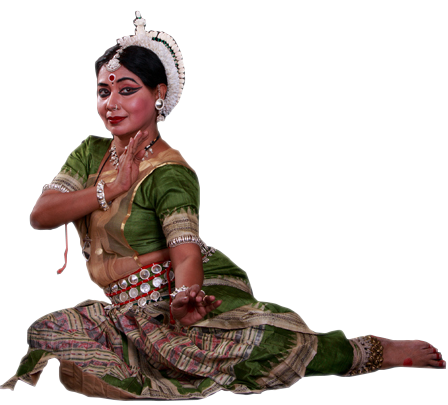 About Aruna Mohanty & Group: Guru Smt. Aruna Mohanty is one of the best Odissi Dancers trained by Padmashree Guru Gangadhar Pradhan. She travels internationally to perform single and group dance shows besides workshops and lecture demos. She is the winner of the Mahari Award (1997), Sanjukta Panigrahi Memorial National Award (2001), Government of India, Fellowship by Ministry of HRD and the prestigious Sangeet Natak Akademi Puraskar Award in 2010.

About Mohiniyattom: Mohiniyattom is a semi-classical dance form from Kerala executed by women. The word Mohini symbolizes a girl who takes the heart of the witness.

About Kuchipudi: Kuchipudi is a dance-drama art, with its roots in the ancient Hindu Sanskrit text of Natya Shastra. It is coined from the Krishna district of Andhra Pradesh.

About Srimayi Vempati & Group: Kuchipudi is related to the Yakshagana ritual having numerous dance-theatres in it, so the nritta part was delimited. The honor of extending the range of nritta movements so as to suit the proscenium stage and the presentation of Kuchipudi as a separate style of dance goes to Vempati.

About Sattriya: Sattriya dance tradition is ruled by firmly laid down values in respect of hastamudras, aharyas, footworks, music etc.

About Dr. Lima Das: Dr.Lima Das is a doctor by profession and a north east dancer by passion. She was deliberated as the India International Dance Festival (IIDF) Award for Sattriya in Bhubaneswar.

About Kathak: The origin of Kathak is conventionally endorsed to the wandering composers of ancient northern India, known as Kathakars or storytellers. This is one of the major dance forms of Indian classical dance. 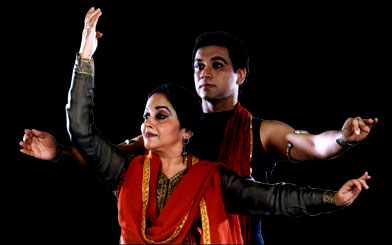 About Maulik Shah & Ishira Parikh: The prominent Kathak dancers, Ishira Parikh & Maulik Shah stand apart among the leading classical dancers of India not only for their incomparable expertise and ability over their medium; but also for their pioneering tactic in performance.

About Bharatanatyam: Unlike all chief classical Indian dance forms, Bharatanatyam also trails the three categories of performance in the Natya Shastra. These are Nritta (Nirutham), Nritya (Niruthiyam) and Natya (Natyam). 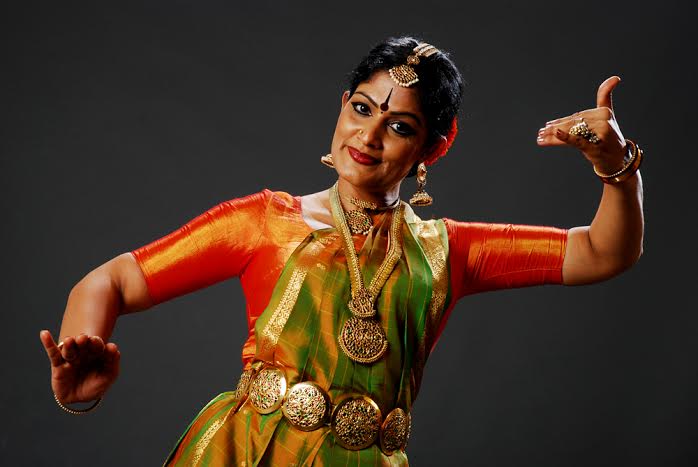 About Padma Shri Geetha Chandran: She skillfully interlaces nonrepresentational concepts of Joy, Beauty, Values, Aspirations, Myth and Spirituality into her dance which she started learning from the age of 5.

About Mohiniyattam: Mohiniyattam is one of most popular classical dance forms of India which is developed and remains famous in God’s own country, Kerala.

About Mandakini Trivedi: She is Master Fine Arts from Bombay University’s Nalanda Nrityakala Mahavidyalaya and was a professor in dance for almost 10 years at the University. She was originally trained in Mohiniyottam by Dr. Smt. Kanak Rele. She is also a winner of the Central Govt. Junior Fellowship for research in Mohiniyottam.

About Bharatanatyam: Bharatanatyam is a major genre of Indian classical dance which is originated in the Hindu temples of Tamil Nadu and neighboring regions. It is a solo dance form from Tamil Nadu executed by women. This dance form expressed spiritual ideas & Hindu religious themes.

About Padma Shri Malavika Sarukkai: She is an Indian classical dancer and choreographer focusing in Bharatanatyam. A 2002 winner of the Sangeet Natak Akademi Award, she was privileged by the Government of India in 2003 with Padma Shri.

About Manipuri: Manipuri dance is also known as Jagoi, it is one of the key Indian classical dance forms, named after the region of its origin – Manipur. It is mostly known for its Hindu Vaishnavism themes, and attractive acts of love-enthused dance Raslila. 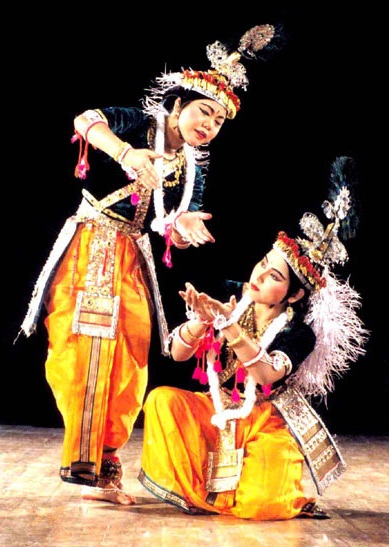 About Padma Shri Darshana Jhaveri & Group: She is a follower of Guru Bipin Singh, and started performing on stage in 1958 along with her sisters. She is one of the organizers of the Manipuri Nartanalaya in 1972, which promoted Manipuri dance in India, and is presently controlled by her, with centers at Mumbai, Kolkata and Imphal.

About Kuchipudi: Kuchipudi is a classical dance form of India which is originated in a village of Krishna district, Andhra Pradesh.

About Uma Murali Krishna: She is a dancer of unparalleled and elegant passion, of the Bharathanatyam and Kuchupudi Schools of Classical Indian dance. She is winner of Singaarmani, Natyakala Rathna and Shri Kanchi Kamakoti award. Best dancer award from Krishna Gana Sabha, Yuvakalabharathi from Bharathkalachar Natanamaamani from Karthik fine arts and Kalaimaamani from the government of Tamilnadu.

About Kathak: Kathak is an Indian classical dance form which is majorly performed in northern India. It is derived from the dance dramas of ancient India.

About Odissi: Odissi is a major ancient classical dance form of India in older literature which is originated in the Hindu temples of Odisha. It was executed by women & expressed spiritual ideas and Hindu religious stories.

About Sujatha Mohapatra: Sujata began dancing Odissi classical and folk dance with Sudhakar Sahu’s dance troupe in programs across Odisha. Under the instruction of Guru Kelucharan Mohapatra, her dance style developed, and she was turned-out to become one of the leading Odissi dancers of her age band.

About Madhu Gopinath and Vakkom Sajeev: Co-founders of the Samudra Centre for Indian Contemporary Performing Arts, this twosome has won the award for best composition for the film ‘Makaramanhu’ directed by Lenin Rajendran. In 2007, these two has won the State and National Awards for best choreographers for their work in ‘Rathrimazha’.

Here is the program schedule, Kathakali/Koodiyattam Festival Schedule & Brochure of the festival.

So, plan your visit today to witness the most awesome dance forms from India performed by the best dancers across the nation. 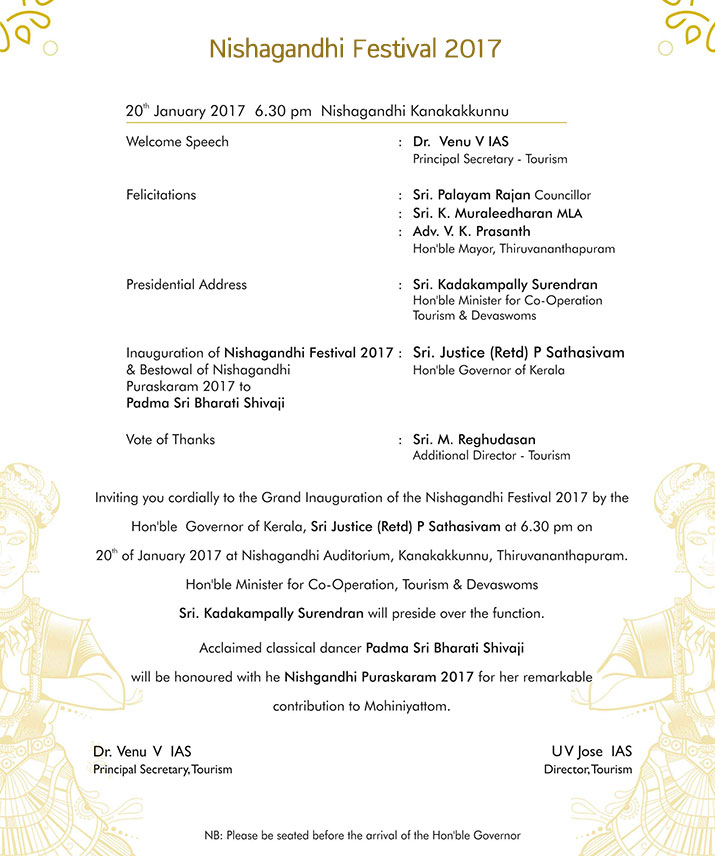