Kerala is known for its rich cultural legacy. Its varied culture is shaped by the three prominent religions of Hinduism, Islam, and Christianity. Attractive statuettes, melodious compositions, and wonderful dance forms can be seen in the momentous development of Kerala’s cultural ethnicities. Festivals of Kerala are equally playing an important role in making Kerala world-famous and most loved tourist destination. Kerala people celebrate all festivals with lots of Joy and enthusiasm. Be it Onam or Snake Boat Race; Kerala celebrates its festivals with devotion. Let’s take a look at various festivals and boat races of Kerala that are celebrated throughout the year.

Here we are giving you information about some of the famous festival of Kerala. 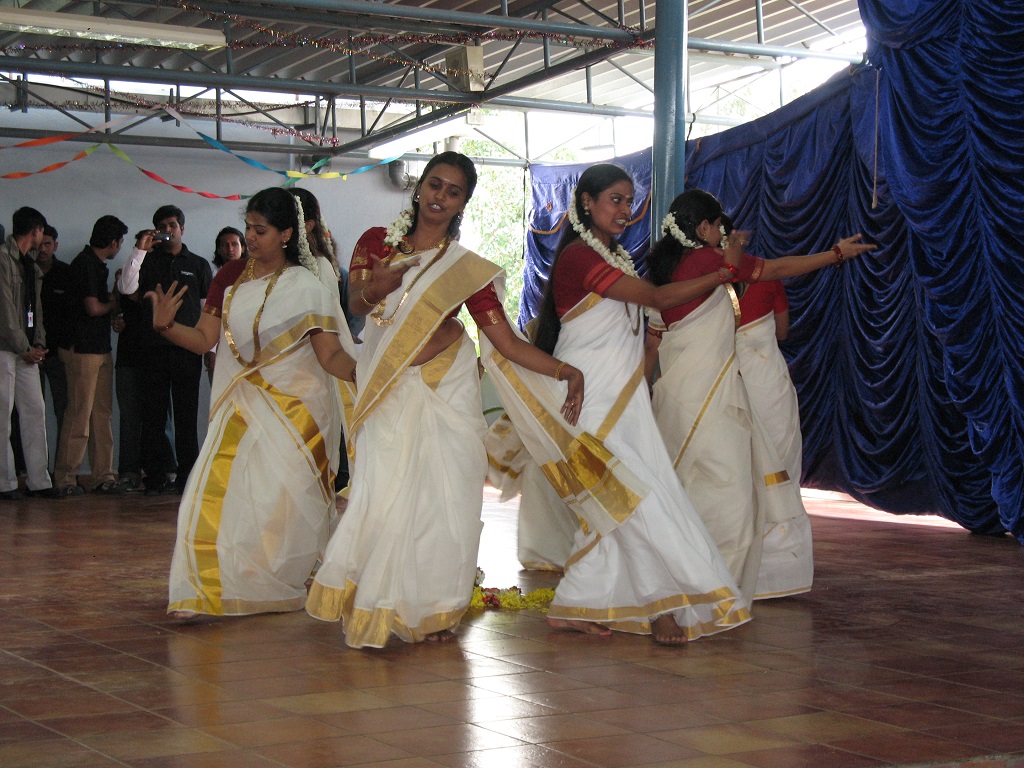 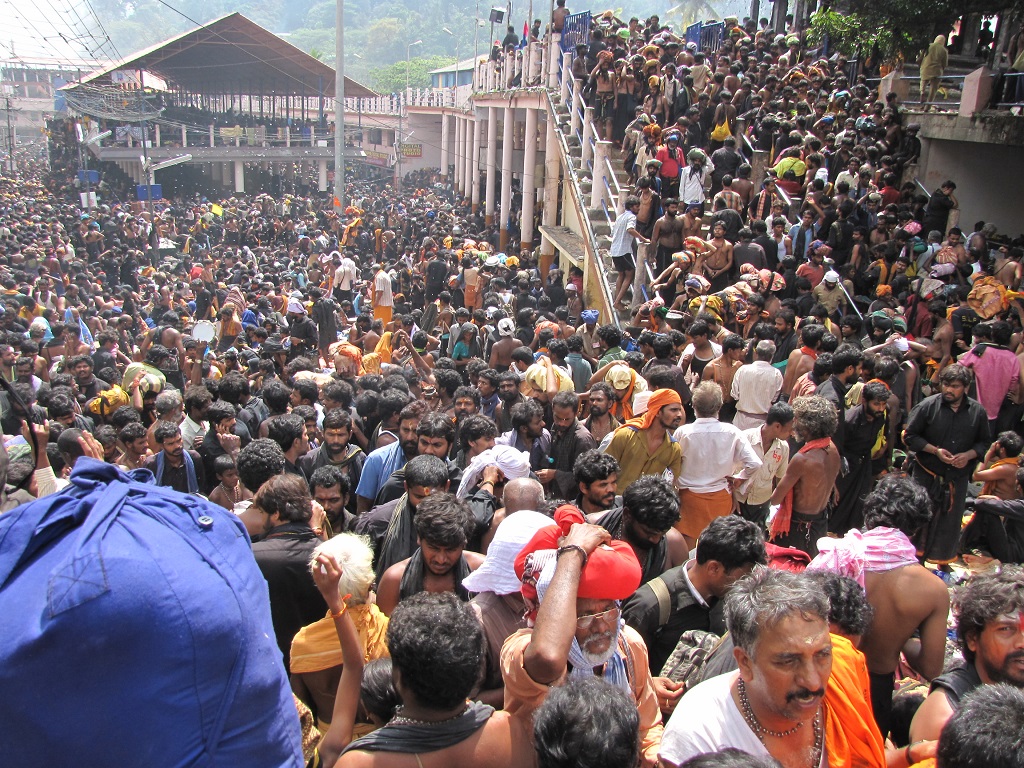 Makara Jyothi is a traditional and annual festival of Kerala. This festival is celebrated in Sabarimala temple with lots of Joy and enthusiasm. Makara Jyothi is also known as Makaravillaku and on this day, Kerala people worship Lord Ayyappa. Makarvillaku refers to the end of the Sabarimala pilgrimage which started in November month. 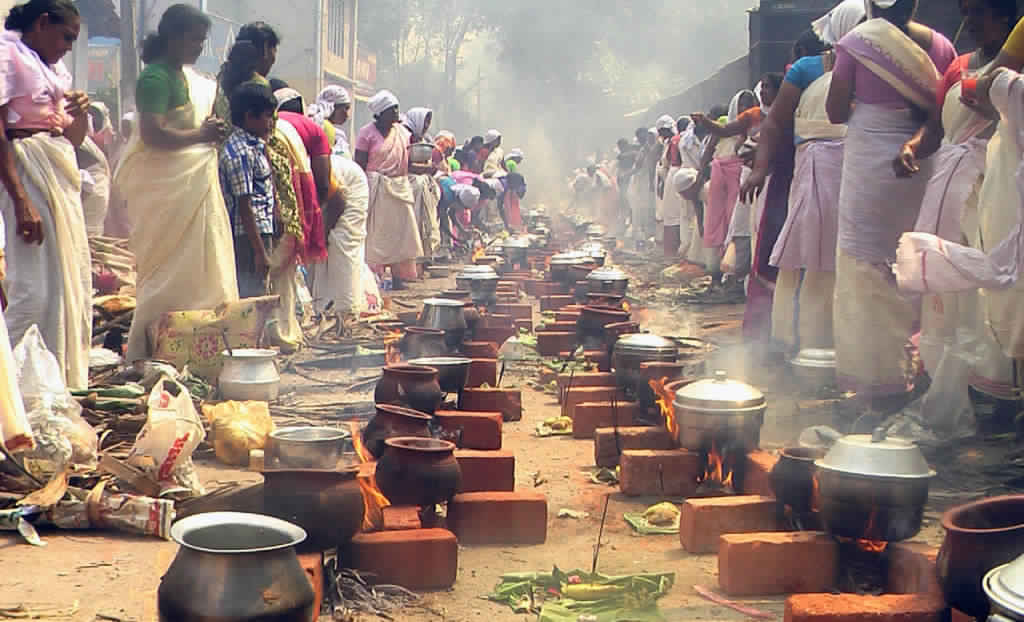 “Pongala” is among the important festivals of Attukal Bhagavathy Temple. The festival begins with the harmonious interpretation of the story of the Goddess (Kannaki Charitam) in the “Kappukettu ceremony”. The story raises the existence of Kodungallur Bhagavathy and the assassination of the Pandyan King. The song will carry on for all the 9 days preceding Ponkala. This festival memorializes the triumph of Good over Evil.

5. Onam – One of the Most Popular Festivals in Kerala: 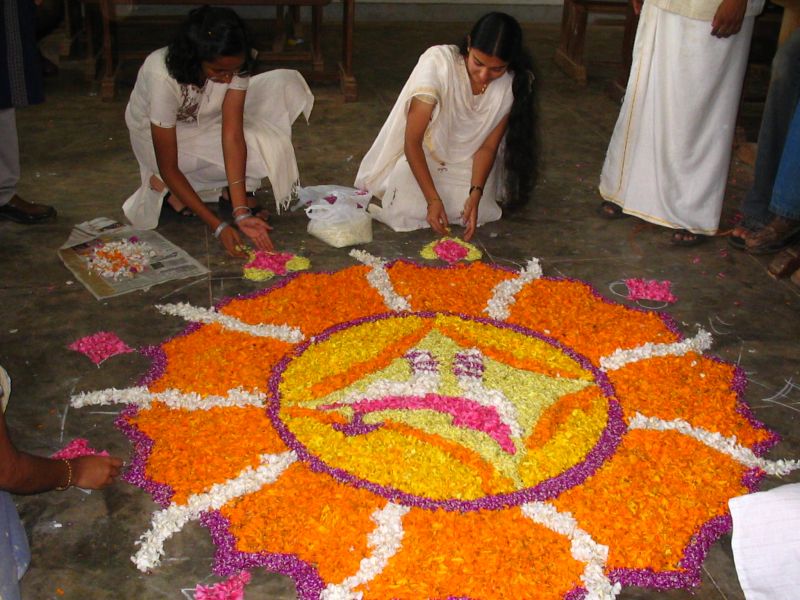 It is the main festival of Kerala marking there visiting of mythological King Mahabali. The celebration of Onam continues for 10 days and takes out the finest of Kerala art, music, and literature with ritual. It is said that in the supremacy of mighty Asura King, Mahabali, Kerala saw its unique time. Everybody in the state was contented and well-to-do. But, Mahabali had one shortcoming. He was egoistic. This flaw in Mahabali’s character was used by God to bring an end to his supremacy as they felt defied by Mahabali’s growing fame. Though, for the entire good endeavor done by Mahabali, God granted him a blessing that he could yearly visit his people with whom he was so close. 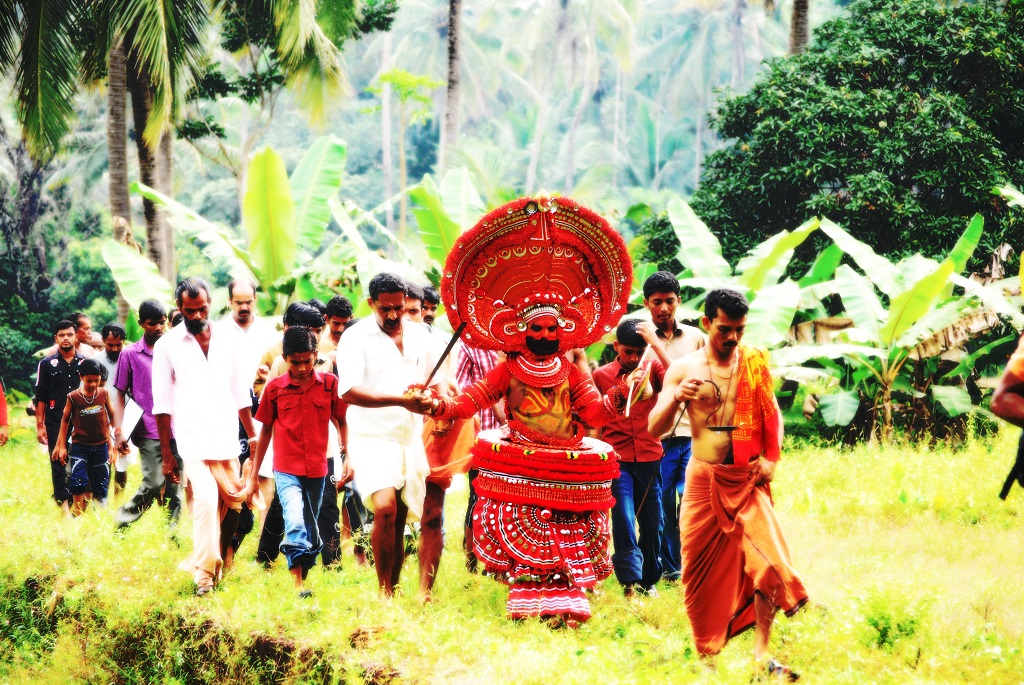 It is also identified as Kaliyattam. It is a ceremonious dance popular in north Kerala. Theyyam includes dance, mime, and music in addition to preserving the fundamentals of antique ethnic philosophies which dedicated great significance to the devotion of brave man and the spirits of descendants. Of the over 400 Theyyams executed, the most remarkable ones are those of Raktha Chamundi, Kari Chamundi, Muchilottu Bhagavathi, Wayanadu Kulaven, Gulikan, and Pottan. These are executed in front of reliquaries, sans stage or draperies, by persons belonging to the Vannan, Malayan, and other associated classes.

7. Thrissur Pooram – One of the Colorful Temple Festivals in Kerala: 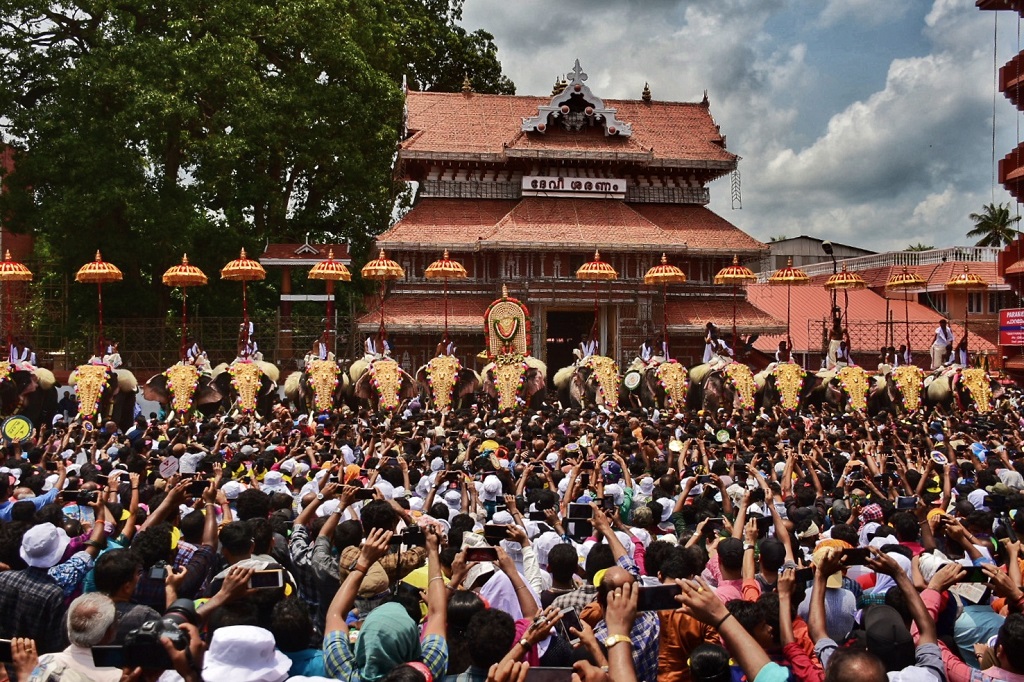 It is reflected to be the Mother of all Poorams, a culture highlight that keeps above all other festivals. It is not a simple temple festival in its severe sense but simultaneously it is the festival of festivals of Kerala. It is a magnificent get-together of Gods and Goddesses in and around Thrissur; who make their visit to the Vadakumnathan Temple premises on caparisoned elephants along with grand troupes of Chenda Melam and Pancha Vadyam. There are ten participants of Pooram. 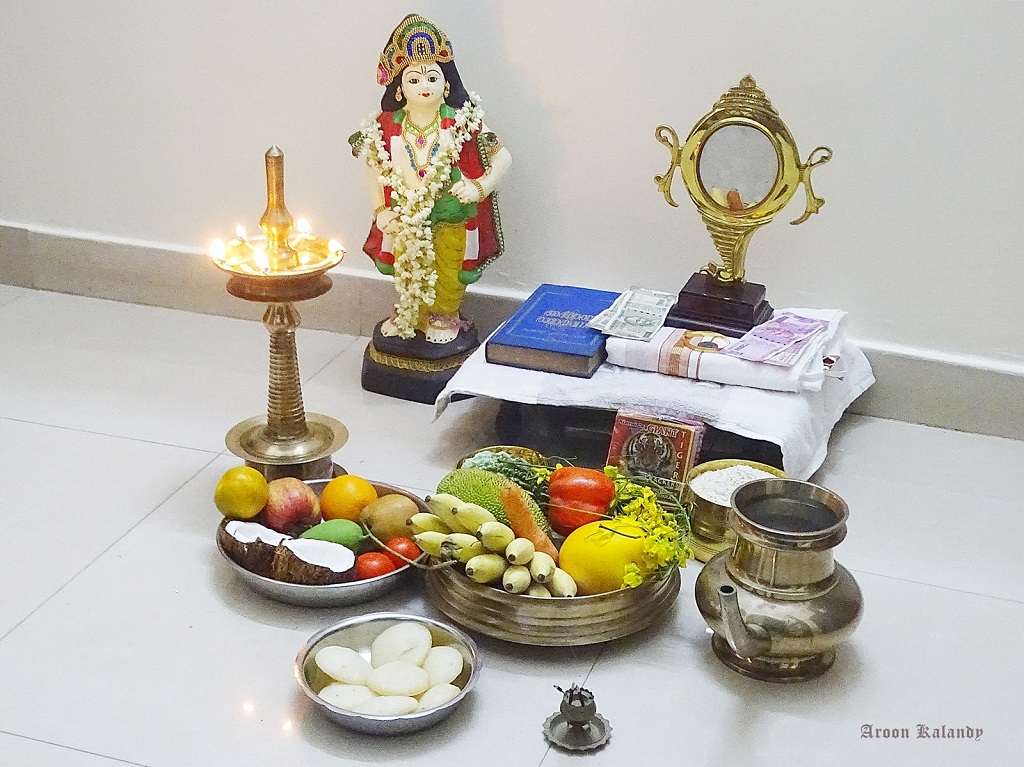 The beginning of the Zodiac New Year; when the sun comes into Sidereal Aries, Ashwini Nakshatra—is renowned as Vishu. It is believed, what one sees after opening eyes on the morning of Vishu is a sign of what one can presume in the year to come. Therefore on Vishu, the effort is made to convince one opens one’s eyes before a fortunate image—the Vishukkani.

Besides Kerala being lands of spices, coconuts, backwaters, and tea plantations also known as the land of festivals and fares. Here’s the list of few famous temples of Kerala where  festivals are  celebrated:

It is the oldest river boat carnival in Kerala taking place at Aranmula, adjacent to a Hindu temple devoted to Lord Krishna and Arjuna. The Aranmula snake boats move in duos to the pace of full-throated singing and yelling viewed by an encouraging mob. They were added to the program of the festival in 1972. Many persons pleat on the banks of the river Pampa to have a look at these snake boat races. The golden lace at the dome of the boat, the banner, and the decorative umbrella in the middle make it a show of spectacle too. 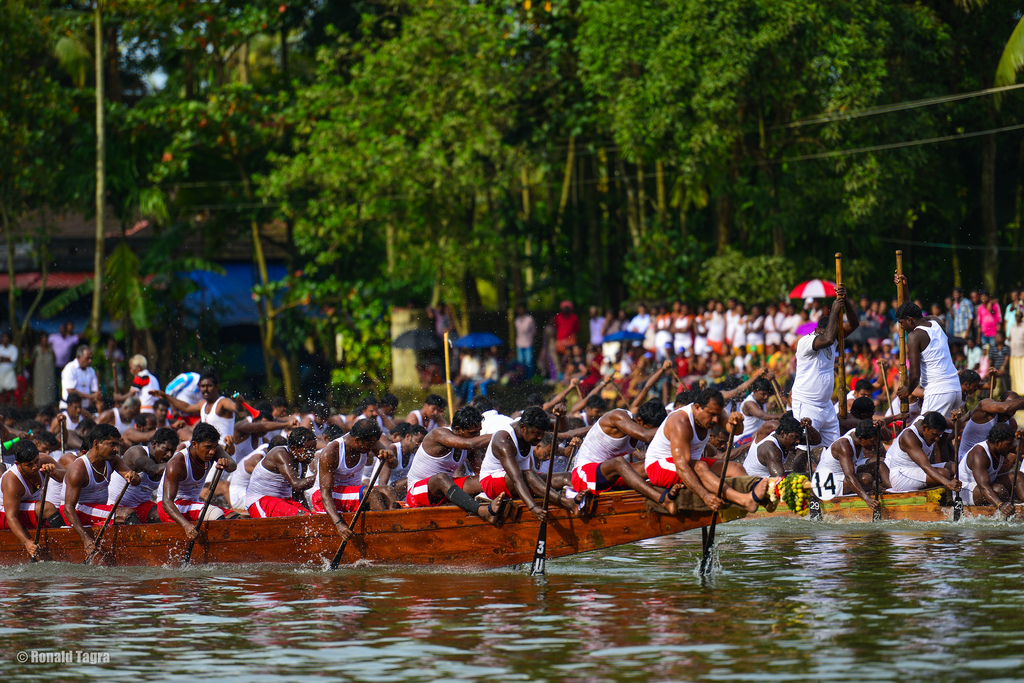 It is baptized after Pandit Jawaharlal Nehru and is lead on the Punnamda Lake, near Alappuzha. Once Pandit Jawaharlal Nehru ventured a voyage from Kottayam to Alappuzha by boat, over waterlogged Kuttanad. The pageantry of boats escorted him on the trip. The first race was spontaneous once steered in 1952 in admiration of Panditji who visited Alappuzha. That race of snake boats was won by Nadubhagam Chundan. Excited Panditji jumped into the Nadubhagam Chundan, overlooking all security measures. In December 1952, Nehruji gave a Silver Trophy, an imitation of a snake boat placed on a wooden abacus. Since then, Alappuzha rejoices the Nehru Trophy Boat Race every year.

Season of boat races, in Keralabegins with the well-known Champakkulam Moolam Vallam Kali. Entitled after the peaceful village of Champakulam, which generally has a farming community, this race is taking place on the course of River Pamba. On the day of the race, local people and tourists from faraway drove the river bank to relish the race. Few people also climb the nearby trees to have a balcony view. The Champakulam snake boat race is a lot deliberated as the eventual test of the resolution, speediness, and cleverness in this county and oars persons numbering about 90 to 100 on each boat go through severe training for numerous days, before partaking in the race.

There is no fixed time of the year to visit Kerala; you can plan anytime you are free. These celebrations and festivals will for sure re-energize you. SreesTours offers the cheapest price Kerala festivals tour packages to explore this God’s own country – Kerala during festivals and events. Contact us to know more about other packages.